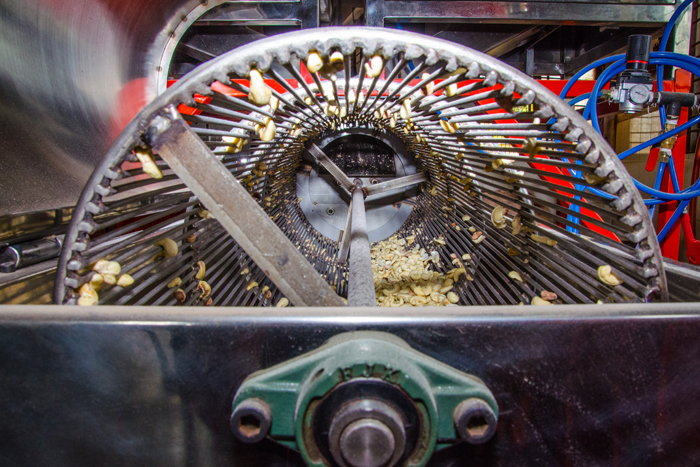 Our Objective at our plant for cashew processing is to extract tasty kernel from the raw nut and bring it to you in different sizes and shapes.The cashew kernel are graded according to size,colour and other characteristics.


The raw nuts purchased from the market or imported are dried in the yards by exposing the nuts to heat of the sun.The moisture content of raw nuts is thus removed and the rawnuts are packed in gunny bags of 80 kgs each and stored in godowns.


The kernels so obtained are graded as 180, 240, 320 etc., etc. and also as "Wholes", "Halves", "Pieces" etc.While the wholes have high value, the latter have lesser value. The figures 180, 240, 320 represent the number of counts each pound of kernel would have.In other words, 320 is smaller in size as compared to 180 grade.Even though there is no change in taste and its nutritious value. Normally, there is a good demand for 180 count within the country and now at abroad also which commands good premium. Neverthless, others like 320 and 240 also exported.


The kernels are packed in metallic tins and before the tins are sealed, carbon dioxide & nitrogen is flushed into the tins containing kernels withdrawing air from the tin and the process ensures avoidance of kernels getting infected by fungus and the gas works as insecticide. Normally, such sealed tins have six to ten months of life before which they are to be consumed. In the recent past, the importers from abroad insist for plastic bag packing/flexipacking instead of packing in metallic tins.Of course, the plastic would be of a specific quality without the danger of causing health hazards.


As Packaging of our product is the most essential, we at DVK have been utilising the latest packaging technology to keep our cashew product at its international standards and increase the shelf life.


At our plant we use moulded vaccum packaging.This vaccum packaging provides protection against oxidation,preserves aroma or flavours by retaining volatile components and impedes bacteria proliferation by its virtual absence of oxygen and water Moulded vaccum packaging augments the barrier properties with its unique five layer co-extruded barrier bag comprising component materials which are totally inert and non-migratory. It is pesticide-free,infestation-resistant and contains no preservative and does not require irradiation.